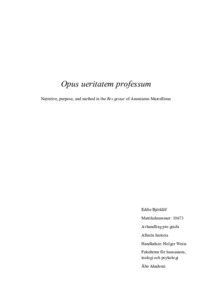 Björklöf, Eddie
All rights reserved. This publication is copyrighted. You may download, display and print it for Your own personal use. Commercial use is prohibited.
Näytä kaikki kuvailutiedot
Julkaisun pysyvä osoite on
https://urn.fi/URN:NBN:fi-fe2021052431385

The time today referred to as Late Antiquity was a time of turbulence and upheaval in the Roman Empire. At the end of the fourth century CE, Ammianus Marcellinus authored an extensive historical account covering the years from 96 CE to 378 CE, Res gestae, although only the books covering the years 353–378 CE are extant. As one of the few literary sources from this period not written by a Christian author, his account holds special significance.

This thesis is a narratological analysis of the extant books of Res gestae, focusing on how Ammianus Marcellinus, despite his assurances that he has attempted to create a work without conscious bias and omission, used it as a vehicle for social and political criticism. The narratological framework created by Hayden White serves as a foundation for the analysis, although the toolkit is further expanded and adapted by relying on the Classic field as well. Using those tools, the thesis explores how Ammianus constructs allusive and specific critical narratives, weaving together different events, actions, and characters, Ammianus excoriates the ruling class of the Roman Empire, making the case for what he feels has contributed to a decline in the Empire. It is a far-reaching account, and the thesis covers a selection of subjects he builds his narratives on; the emperors that serve as the narrative focal point, their authority and use of power, religion, the portrayal of the city of Rome, and the use of groups such as eunuchs that Ammianus portray as a manifestation of the ills that plague the Empire.

The conclusion is that Res gestae a highly biased and reactionary work, where the last pagan emperor, Julian, is portrayed in a manner that makes him serve as a didactic blueprint for everyone to emulate. The narratives of the other emperors makes clear that they are less than Julian, and are thus contributing to the turbulence in the empire. Ammianus reinforces this through different narrative techniques, weaving together the aforementioned subjects to strengthen his point. The bias Ammianus shows on occasion can be the result of his own natural bias, or it could be a result of him using different subjects to create a critical narrative, or both. Ammianus was affected by the sociopolitical context he was writing in, and thus had to be more discreet in his approach regarding subjects such as religion. The fraught and turbulent times clearly affected him, and Res gestae is a reactionary and didactic response that Ammianus was well suited to write due to his professional and social background.