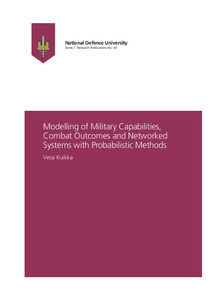 This study is about the mathematical modelling of three important concepts. In selecting these three areas, we had certain general principles in mind, in particular: they should cover a wide range of concepts in the military domain and they should be central in the areas of military planning and operations. As a consequence of these guidelines, the three military concepts had to be made abstract to cover a wide range of military applications. Selecting from the set of highly conceptual concepts, that are central and important, is not unambiguous but it is easy to come up with good candidates. We selected the following three areas as our modelling objectives: military capabilities, combat outcomes and networked defence systems. These three concepts satisfy both the broadness and centrality criteria.

Our aim to cover a wide range of applications has also another dimension: using a common mathematical methodology enables us to develop quantitative models in different conceptual operational areas. The advantage of this approach is to have the same basis in the entire work we are going to perform.

Because our goal is to have a common mathematical methodology in describing military concepts, we end up with a natural choice of probabilistic modelling. We don’t have proof that probability theory is the only possibility in our case; however, it is probably the only one that meets the requirement of quantitative modelling. As a consequence, this approach allows comparing the modelling results in the selected application areas. Further, it also enables extending the models to more detailed structures or other application areas in the military domain. This shows that probability theory can be applied to a wide range of modelling problems in military studies.

All the proposed models have been tested with numerical examples. These examples show that the models provide reasonable and consistent results. Probabilistic models are demonstrated in the three case studies of military capabilities, combat outcomes and networked systems. The model proposed for modelling combat outcomes is also used to model combat effectiveness during the engagement in three combats where the time-dependent empirical data is available.