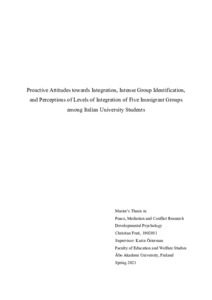 Frati, Christian
All rights reserved. This publication is copyrighted. You may download, display and print it for Your own personal use. Commercial use is prohibited.
Näytä kaikki kuvailutiedot
Julkaisun pysyvä osoite on
https://urn.fi/URN:NBN:fi-fe2021061738626

Aim: The aim of the study was to investigate levels of proactive attitudes towards integration, intense group identification, and perceptions of levels of integration of five groups of immigrants among Italian university students.
Method: A questionnaire was completed by 60 female and 46 male university students in Italy. The mean age of the participants was 23.7 years (SD 4.8) for females, and 23.6 years (SD 3.8) for males.
Results: There was no sex difference regarding openness to diversity or level of intense group identification, neither on the attitude that cultural efforts, and structural efforts are needed in order to integrate immigrants. Respondents with values above the mean on openness to diversity scored higher than the others on the notion that both cultural and structural efforts are needed in order to integrate immigrants. Intense group identification was overall low in the sample, it correlated negatively with openness to diversity and the need for cultural efforts, but not with the need for structural efforts. The students perceived that the level of integration was lowest for Romanian immigrants and highest for Albanians.
Conclusions: Openness to diversity was positively associated, and intense group identification was negatively associated with the notion that efforts are needed in order to integrate immigrants.