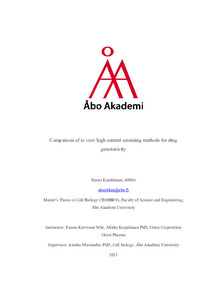 Kuokkanen, Emmi
All rights reserved. This publication is copyrighted. You may download, display and print it for Your own personal use. Commercial use is prohibited.
Näytä kaikki kuvailutiedot
Julkaisun pysyvä osoite on
http://urn.fi/URN:NBN:fi-fe2021042511768

Detection of chemicals that induce damage to the DNA is an important aspect in drug development. The recognition of these chemicals is based on in vitro studies followed by in vivo studies, the latter being both expensive and ethically questionable. An early, accurate prediction of the genotoxic properties of these chemicals is therefore highly desired.

The phosphorylated histones yH2AX and pH3 are well established genotoxicity markers, yH2AX expressed upon double-stranded DNA damage caused by clastogens, and pH3 accumulating as a cause of aneuploidy in mitosis caused by aneugens. The detection of these, in combination with a translocation of p53 to the nucleus in response to DNA damage, is one example of markers used for high content genotoxicity analyses. In this study, these three markers were used to evaluate the genotoxic predictivity of 16 reference compounds with known properties in TK6 and HepG2 cells by two different high content methods for genotoxicity screening. The cells were exposed to the compounds over a range of concentrations for 4 and 24 hours. The first method used was a validated flow cytometry-based DNA damage assay MultiFlow® which was used with both TK6 and HepG2 cells. The other method was an imaging-based high content analysis method that was set up in this study and tested on HepG2 cells only. The aim was to compare these two methods and see which method could predict the genotoxic potential more accurately.