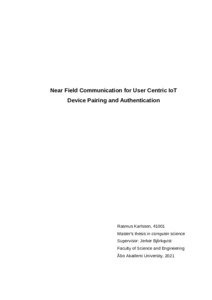 Karlsson, Rasmus
All rights reserved. This publication is copyrighted. You may download, display and print it for Your own personal use. Commercial use is prohibited.
Näytä kaikki kuvailutiedot
Julkaisun pysyvä osoite on
http://urn.fi/URN:NBN:fi-fe2021051830484

Many IoT pairing methods that are currently in use suffer from poor security due to, for example, choices made in order to make them more user-friendly. Factors that contribute to the lack of security include too high levels of automation and long-range wireless pairing without any authentication. The aim of the present thesis was to investigate whether or not Near Field Communication, or NFC, could be used to pair IoT devices and set up secure network communication with improved security and ease of use compared to other commonly used technologies. The main design goals of the NFC-based pairing solution were to provide a system that is easy to use regardless of the technological skills of the user, while providing decent security without requiring any configuration by the user. Some important threats to IoT security were explored, and alternative methods of pairing IoT devices were presented and compared on a theoretical level to the NFC-based proposal. In order to test the technical viability of the NFC-based pairing and authentication solution, a prototype software was programmed and tested on a suitable hardware platform. The results of the testing of the prototype were then evaluated to see whether or not the prototype fulfilled the set design goals. The testing showed that the proposed technology worked as expected and fulfilled the set design goals with no major issues being encountered. In conclusion, the NFC-based pairing method seems to be a technologically viable option. With some further development, it could easily be adapted for use in production systems.