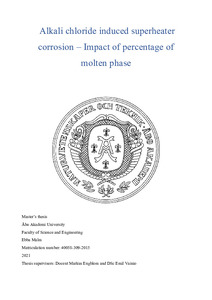 World energy consumption has doubled in the last thirty years, and projections indicate that the energy demand will increase. Carbon dioxide is the most critical greenhouse gas generated by human activity, originating predominantly from fossil fuels, such as coal and oil. Reducing global warming has become a major goal for the next few decades. One possible solution to this problem is switching from fossil fuel to renewable fuels, such as biomass. From an environmental point of view, biomass is considered a carbon dioxide-neutral fuel as long as it is utilized in a sustainable manner.

However, the shift from fossil to biomass fuels has introduced challenges to boiler operation and efficiency. Compared to fossil fuels, biomass is an inhomogeneous fuel, and the properties and qualities of different biomasses vary a lot depending on the growth area, seasonal variations, fertilizers, etc. Biomasses may contain considerable amounts of chloride and potassium, all known to have a detrimental impact on the lifetime of the superheater material. In addition to this, black liquor also consists of inorganic chemicals from the pulping process.

Alkali chlorides on superheater surfaces may cause serious fouling and corrosion problems. One major challenge in the recovery boiler is the molten salt corrosion of the heat exchange tube material, which limits the steam temperature and boiler efficiency of the boiler. Due to high-temperature corrosion, steam outlet temperatures have been kept lower than the corresponding coal-fired boilers. In black liquor recovery boilers is steam temperature typically below 500 ℃, due to the presence of molten alkali salts. Lower steam temperatures lead to lower electrical power output. As a general perception, increasing steam temperature by 10 ℃, increases the power production by approximately 2%.

The focus of this work was to investigate the role of melt amount on superheater corrosion in Kraft recovery boilers. The purpose is to obtain a better understanding of the role of the amount of melt on corrosion, for the purpose of increasing the steam temperatures of the boiler. The chemical composition of the melt is only shortly discussed in this work.

The experimental part of this work consists of a laboratory corrosion study where three superheater materials were exposed to five tailor-made well-characterized synthetic alkali salt deposits. The synthetic alkali salts, containing sodium, potassium, sulfate, chlorine, and carbonate, were composed so that their first melting temperature (T0) was the same for all cases,but the amount of molten phase varied. Each steel/salt combination was exposed to temperatures above and below T0 to see the significance of the molten phase at corrosion.

The chemical composition of the salts was planned and calculated based on thermodynamic calculations with the software Factsage 7.3 using the FTpulp database to obtain a well-characterized salt mixture with specific melt fraction and composition. The chemical composition of the produced salts was analyzed with SEM-EDX and Ion Chromatography and thermodynamic calculations were done based on the data from the SEM analysis, to check the melting behavior of the produced salts. The corrosion products were analyzed by means of scanning electron microscopy with energy-dispersive X-ray spectroscopy (SEM-EDX).

The tailing distribution curves were observed for Sanicro 28 at 2, 4, 6 wt-% melt. The tailing distribution curves indicate that local corrosion was a common corrosion behavior at the lower melt fractions for this steel. Furthermore, a more uniform corrosion layer was observed on the surface of the Sanicro 28 exposed to the highest melt fraction, 20 wt-% melt. The oxide scale on 10CrMo9-10 steel was typically observed in the form of multiple thin separated layers ofcorrosion product, which is a typical corrosion behavior for the iron-based ferritic steels. Finally, no grain boundary attack was observed beneath the steel surface for the tests in this study.