Why do esports players consume esports? : A case study of an esports platform 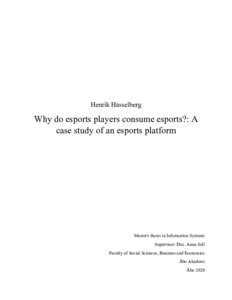 Hasselberg, Henrik
All rights reserved. This publication is copyrighted. You may download, display and print it for Your own personal use. Commercial use is prohibited.
Näytä kaikki kuvailutiedot
Julkaisun pysyvä osoite on
http://urn.fi/URN:NBN:fi-fe2021060333479

Esports is one of the fastest growing industries in the world. An essential part of this growth are the competitive platforms, which allow players and teams to compete in their favourite esports titles. Esports platforms strengthen existing communities, build new ones and help form professional players out of amateurs. However, these platforms are also competitors to each other. The goal for each company hosting an esports platform is to gain more users and keep them active on its platform. To be successful in this, they must understand what their users want.

This study explores why esports players play esports games and what they want to do on an esports platform. A literature review of esports players was conducted to examine why they play esports games. The following factors were found to affect esports consumption: competition, socialization, exploration, challenge, diversion, peer pressure, escapism, skill building for playing real sport. These eight motivational factors were further utilized in a case study.

The case study consisted of four research participants who actively used an esports platform. A survey was conducted to measure the participants gaming motivations, while depth interviews were used as the method to examine what they want to do on an esports platform. The survey results showed that the following factors did have an effect on participants interest in esports: competition, socialization, exploration, challenge and diversion. Meanwhile the interview results showed that the participants wanted to do the following tasks on an esports platform: go into the game as quickly as possible, play the game in a competitive environment, inspect performance with advanced statistics and socialize with other players.