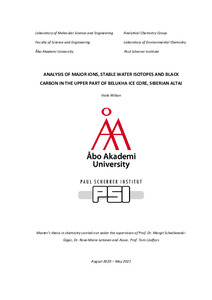 Wilson, Viola
All rights reserved. This publication is copyrighted. You may download, display and print it for Your own personal use. Commercial use is prohibited.
Näytä kaikki kuvailutiedot
Julkaisun pysyvä osoite on
https://urn.fi/URN:NBN:fi-fe2021052631828

There are many different paleoarchives, e.g. sediments, ice cores, tree-rings, speleothems and corals. This master’s thesis focuses on the information receivable from ice cores. Well preserved information of past precipitation can be found as natural archives in glaciers. This is possible if the melting is negligible and if the precipitation during the year occurs as snow. Annual snow layers will contain information of chemical impurities and stable water isotopes, which can determine past climate and air pollution. Climate change reduces the volume of glaciers all around the world, it is therefore important to conduct paleoclimatic research and retrieve ice cores while the opportunity still exists.

Concentrations of major ions, and Black Carbon (BC) as well as the ratio of stable isotopes of oxygen and hydrogen in water were analyzed for the first 26.5 m of an ice core from the Belukha glacier in the Siberian Altai. Some melting had occurred on the glacier, which led to shifting or loss of some chemical signals. Clear signals for mineral dust-related species (calcium, magnesium, sodium and chloride), anthropogenic-related species (nitrate, sulphate and ammonium) and the biogenic and biomass burning related species (formate, oxalate and ammonium) could still be seen. The dating was accomplished by comparing the records with another ice core drilled from the Belukha glacier in 2001. One distinct dust peak and seasonally varying signals proved to be significant for dating. This part of the ice core extended back to year 1984 and a good agreement could be made between the two ice cores from Belukha. Most of the analyzed ions showed a decreasing trend in concentration from 1984 to 2018. An exception was the concentrations for methanesulfonic acid (MSA) and potassium. The increase in MSA (sea-ice proxy) was believed to be due to melting of ice in the Arctic Ocean. The increase in potassium concentrations was not easily explained.

The mean δ18O value (-13.09‰) was considered a high value for the elevation of 4506 m a.s.l., this indicated lack of strong winter minima. The deuterium-excess (d-excess) value was higher during the winter months and lower during the summer months, which suggested an input of water vapor from internal sources during the winter and from external sources during the summer. One dust layer was visually observed in the ice core; this dust event happened in 2006 and the increased calcium and magnesium concentration at this depth confirmed the dust event.