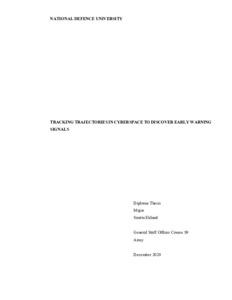 This thesis is about the weak signals of the future cyber threats that armed forces may face. The research question of this study was: “what are the early warning signals material points out in search of the possible future cyber threats of the armed forces?”. The aim was to point out early warning signals in five trajectories. These trajectories were developed from the phenomena that were found in the first part of the research. The first part was conducted in the Helmut Schmidt University in Hamburg ending to a thesis titled “Shaping Single Signs into Significant Phenomena”.

The focus of the research was in the five phenomena: sensors, manipulation, speed, artificial intelligence and networking. These phenomena were developed into trajectories. Critical turning points were searched from these trajectories by linking them to single signals, connecting them together and assessing the development from the temporal aspect.

The key results of this research are five critical turning points in the trajectories. Two of them are related to the development and traceability of the artificial intelligence, one is about a new actor in cyberspace, one about the loss of control in networks and the last one is related to the sensor development.

The research method was the Delphi survey. The group of respondents answered anonymously in three rounds producing material for the analysis. The research orientation was hermeneutical and subjective interpretation was emphasized in the research.