Gendered Inequalities in the Domestic Sphere : A Study of Nepalese Women’s Situation During COVID-19 Lockdown 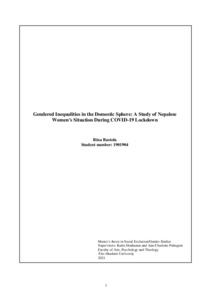 Bastola, Rina
All rights reserved. This publication is copyrighted. You may download, display and print it for Your own personal use. Commercial use is prohibited.
Näytä kaikki kuvailutiedot
Julkaisun pysyvä osoite on
https://urn.fi/URN:NBN:fi-fe2021050729246

Gendered inequality occurs in a household when there are hierarchal distributions of roles in task performance, with most of the workload falling on one gender category. While gendered disparities origins from long-standing societal and cultural norms, the domestic sphere is a social environment where such differences situate and persist. In Nepal, the patriarchal system establishes systemic barriers to gender equality and distributes disproportionate decision-making authority in the domestic realm between men and women. Since patriarchal traditions regulate women’s workforce, they play submissive positions under male dominance, which establishes separate spaces for men and women, with men in the public domain and women in the private household realm. When women are gendered to perform in the domestic area, they shoulder a significant household and care work that exacerbates during pandemic outbreaks and lockdown, when all family members are stuck at home.

This study examines the origins of patriarchy and unequal gendered roles in Nepalese homes and how women as a gendered group are affected when dealing with social emergencies like pandemic outbreaks.

This thesis’s essence comprises the primary data collected through an online video interview of five Nepalese respondents from different family backgrounds and cities in Nepal and Finland. The Snowball sampling method is applied to choose the respondents for this study. In this research, the employed method is qualitative research through online interviews and open-ended questions, and the interpretative paradigm’s narrative analytical method analyzes the achieved materials. Previous research supports all narrative interpretations in the form of theoretical background.

The findings of this study revealed that Nepalese women perceive themselves as the inferior gender among men and women. This result is from the influence of familial and kinship norms that governed women’s behavior during the Panchayat era. This idea aimed to improve Nepalese women to align their development with that of the women worldwide, resulted in several interferences restricted women’s activities. Thus, these standards articulated patriarchy, which values men rather than women and divides the public and private domestic environments for the former and latter groups, respectively. Women still relegate more to the domestic realm due to the strong continuity of gendered inequalities in the work division. During the pandemic lockdown, this had a detrimental effect on all facets of their life, including a rise in unpaid care and domestic chores and deterioration in health, education, employment, and mental well-being.

This study finds that most women remain relegated to domestic rules, furthering gendered stereotypes in domestic spheres, demonstrating the persistence of historical standards. In addition, the prevalence of gendered household work burden and minor assistance from males in the domestic sphere has affected women’s well-being. During the COVID-19 pandemic lockdown, this situation increased women’s economic dependency on men and education discontinuity, job instability, and the strain of unpaid domestic and child care duties.