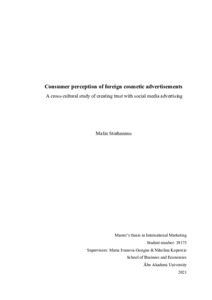 Storhannus, Malin
All rights reserved. This publication is copyrighted. You may download, display and print it for Your own personal use. Commercial use is prohibited.
Näytä kaikki kuvailutiedot
Julkaisun pysyvä osoite on
http://urn.fi/URN:NBN:fi-fe2021042611922

Along with the increase of social media usage, the consumer behavior has changed. This has forced companies to adapt to the changes and modify their communication strategy in order to attract customers. This change is visible as companies worldwide spend large amounts on integrating social media marketing into their communication strategies. As globalization is a fact and consumer trust is decreasing, companies must find ways to stand out but also stay relevant to consumers. Culture has been shown to play a significant role in creating effective traditional marketing, but what is still unclear is whether it plays an equally large role in social media marketing.

This thesis explores how female consumers of the millennial generation perceive a foreign company’s ads on social media. More specifically, it examines how brand awareness and trust can be created with social media marketing. The Finnish cosmetics company Dermoshop was chosen for the case study as they are expanding to new markets, i.e. Denmark and Germany, using English social media marketing. The millennial generation was chosen based on the assumption that they are the main group the company will reach with its marketing; they are active social media users and might be more used to encountering English information. The study was carried out by conducting two focus group discussions consisting of five Danish consumers and five German consumers born between 1991-1998. The discussions took place in Zoom where participants were to discuss social media usage, social media advertising, and examples of the focus company’s social media ads. The examples of social media ads were produced specifically for this purpose from the company’s material and included cultural cues and varying types of content. Both discussions were recorded and transcribed, and the transcriptions were later coded into central themes.

The analysis and the results show several differences between groups that can be connected to cultural differences and the theoretical framework, e.g. Hofstede and Hall’s culture theories. Cultural dimensions are visible to some extent and it can, therefore, be concluded that culture affects consumers’ perception of social media ads. For instance, the study identified innovation, informativeness and authenticity as important factors in creating effective social media ads across cultures. The results also indicated that the millennial generation is an informed and conscious group, which demands the communication to be adapted to their needs and preferences. This thesis, thus, provides valuable knowledge about the generation and what needs to be considered when producing social media ads targeted at the millennial consumers in different cultures.