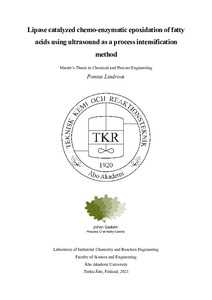 Lindroos, Pontus
All rights reserved. This publication is copyrighted. You may download, display and print it for Your own personal use. Commercial use is prohibited.
Näytä kaikki kuvailutiedot
Julkaisun pysyvä osoite on
http://urn.fi/URN:NBN:fi-fe202104079649

The recent trend in switching from fossil to renewable sources in the production of essential chemicals has revealed novel methods within the concept of green chemistry. This work focuses on the epoxidation of oleic acid with a chemo-enzymatic approach using immobilized lipase as catalyst. Different hydrogen peroxide versus fatty acid ratios, temperatures and stirring rates were evaluated. Acoustic irradiation was implemented for reaction intensification and different ultrasound amplitudes were studied.

The experimental results show that almost complete conversions of the double bonds in oleic acid are achievable in an isothermal batch reactor, with low concentrations of ring-opening byproducts produced. Ultrasound irradiation is used for enhancing the reaction rate, reaching high conversions in four hours of reaction time. Novozym® 435 reveals to be a working and durable catalyst for fatty acid epoxidation. The catalyst preserves its activity and selectivity well, which was confirmed by catalyst recovery experiments conducted both in a conventional batch reactor and in a sonochemical reactor in the presence of ultrasound. However, SEM images revealed that the cavitation caused by ultrasound has an impact on the catalyst morphology.

Different mathematical models for the reaction kinetics were developed and evaluated by parameter estimation using non-linear regression analysis. Statistical data for the mechanisms were evaluated and the best performing model was chosen with the chemical knowledge in mind. All the models and their estimated parameter values showed a good fit to the experimental data.