The painter Meri Genetz and the endless quest for spiritual wisdom 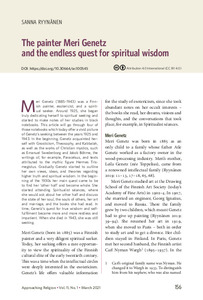 Meri Genetz (1885–1943) was a Finnish painter, esotericist, and a spiritual seeker. Around 1925, she began truly dedicating herself to spiritual seeking and started to make notes of her studies in black notebooks. This article will go through four of those notebooks which today offer a vivid picture of Genetz’s seeking between the years 1925 and 1943. In the beginning, Genetz acquainted herself with Gnosticism, Theosophy, and Kabbalah, as well as the works of Christian mystics, such as Emanuel Swedenborg and Jakob Böhme, the writings of, for example, Paracelsus, and texts attributed to the mythic figure Hermes Trismegistus. Gradually Genetz started to outline her own views, ideas, and theories regarding higher truth and spiritual wisdom. In the beginning of the 1930s her main quest came to be to find her ‘other half’ and become whole. She started attending Spiritualist séances, where she would ask about her other half and discuss the state of her soul, the souls of others, her art and marriage, and the books she had read. In time, Genetz’s quest for true wisdom and self-fulfilment became more and more restless and impatient. When she died in 1943, she was still seeking.