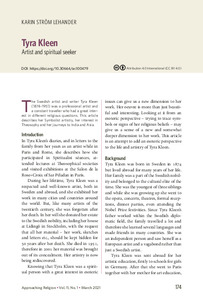 Around the year 1900, European discourse on art was becoming increasingly ‘esotericized’. The 1890s saw esoteric art salons create a sensation in Paris, and art critics and theorists painted a picture of the true artist and the esotericist as overlapping figures. There was also at the time a conflict regarding mediumistic art, a phenomenon initially made popular through Spiritualist mediums. This debate, as we shall see, had interesting gendered dimensions. In what follows, I will discuss how the Swedish female esotericist and artist Tyra Kleen (1874–1951) attempted to situate herself in connection to the concept of the artist as a magus, and the tensions between the positive view of mediumism in Spiritualism and the more negative or cautious approach to it in Theosophy, as well as in relation to the attendant gender issues.