Sigrid af Forselles and ‘The Development of the Human Soul’ 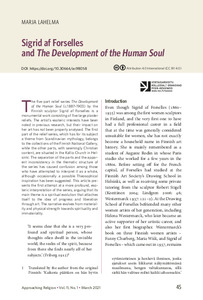 The five-part relief series The Development of the Human Soul (c.1887–1903) by the Finnish sculptor Sigrid af Forselles is a monumental work consisting of five large plaster reliefs. The artist’s esoteric interests have been noted in previous research, but their impact on her art has not been properly analysed. The first part of the relief series, which has for its subject a theme from Scandinavian mythology, belongs to the collections of the Finnish National Gallery, while the other parts, with seemingly Christian content, are situated in the Kallio Church in Helsinki. The separation of the parts and the apparent inconsistency in the thematic structure of the series has caused confusion among those who have attempted to interpret it as a whole, although occasionally a possible Theosophical inspiration has been suggested. This article presents the first attempt at a more profound, esoteric interpretation of the series, arguing that its main theme is a spiritual evolution that attaches itself to the idea of progress and liberation through art. The narrative evolves from materiality and physical strength towards spirituality and immateriality.