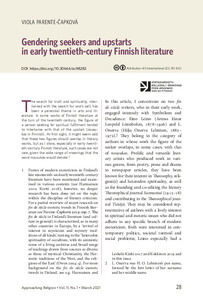 The search for truth and spirituality, intertwined with the search for one’s self, has been a perennial theme in arts and literature. In some works of Finnish literature at the turn of the twentieth century, the figure of a person seeking for spiritual fulfilment tended to intertwine with that of the upstart (nousukas in Finnish). At first sight, it might seem odd that these two figures should overlap in literary works, but as I show, especially in early twentieth-century Finnish literature, such cases are not rare, given the wide range of meanings that the word nousukas would denote.