Migrants at the Borders of Europe : The European Framework for Protection against Pushbacks and Collective Expulsions 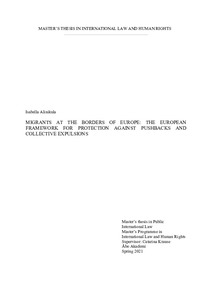 Alinikula, Isabella
All rights reserved. This publication is copyrighted. You may download, display and print it for Your own personal use. Commercial use is prohibited.
Näytä kaikki kuvailutiedot
Julkaisun pysyvä osoite on
http://urn.fi/URN:NBN:fi-fe202102013357

Practices of pushbacks and collective expulsions have become an increasingly worrying trend at the external borders of European countries. While several states have been dealing with an increased migratory pressure, reports by international organizations have revealed that migrants are being immediately returned at borders and denied access to asylum. These reports have concerned actions taken particularly at the borders of EU Member states. Pushbacks can be described as referring broadly to the informal expulsion (without due process) of an individual or group to another country. Notably, the immediate rejection and removal of migrants at borders make it impossible for the authorities to assess the protection needs of migrants and to assure that migrants enjoy their human rights and fundamental freedoms. One of the highest risks attached to pushbacks and collective expulsions is the violation of the non-refoulement principle, which prohibits expulsion if there is a real risk that the person concerned would be subject to ill-treatment in the country of destination. Evidently, the absence of the risk of refoulement can only be assured through examining the individual situation.

Article 4 of Protocol No. 4 to the European Convention on Human Rights (ECHR) and Article 19 (1) of the EU Charter of Fundamental Rights (EU Charter) explicitly prohibit the collective expulsion of aliens. The definition of a “collective expulsion”, as provided by the European Court of Human Rights (ECtHR), indicates “any measure compelling aliens, as a group, to leave a country, except where such a measure is taken on the basis of a reasonable and objective examination of the particular case of each individual alien of the group”. Two aspects are thus of relevance; first, that the individual in question is expelled together with other persons, as a group, and secondly, the fact that his/her situation was not examined individually by the national authorities. Despite Protocol No. 4 having been established already in 1963, the ECtHR has ruled a violation of Article 4 of Protocol No. 4 in only eight cases. In addition, the Court of Justice of the European Union (CJEU) has never been asked to interpret Article 19 (1). Thus, several questions remain open regarding the prohibition of collective expulsion and how this applies to an individual who forms part of a group. As the case law of the ECtHR concerning collective expulsions have increased rapidly over the recent years, judges of the Court have been compelled to assess these questions.

In the present thesis, the aim is to provide an answer to some of the most pressing legal issues that have emerged in the case law of the Court concerning the prohibition of collective expulsion. Notably, the purpose is to provide valuable guidance in assessing when an expulsion has been of a collective nature, particularly in relation to situations of pushbacks at borders. The analysis will be done first by analysing the relevant case law of the ECtHR and second, by examining the relevant EU law and the case law of the CJEU. As the prohibition of collective expulsion is highly interlinked with the need for procedural safeguards and legitimate reasons justifying expulsion, this thesis focuses particularly on the procedural guarantees which can be derived from the prohibition. Since the most crucial part of the prohibition entails the right to an individual and objective examination of the particular case of each alien of the group, the purpose will be to clarify the level of individual examination which is required under the prohibition.