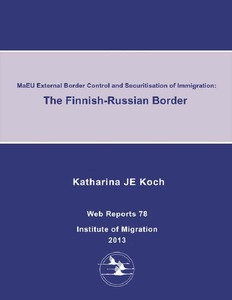 Immigration is a sensitive issue in the European Union (EU) and often associated with negative connotations such as welfare abuse, unemployment, and security threats. The 1985 Schengen agreement removed internal border controls within their member states and therefore, external border protection is a major concern of the EU and heads of states. European external border control tightened up with the changing European discourse towards immigration, especially since the terror attacks in the first decade of the 21st century. Therefore, the research question that will be answered is how does the EU external border policy influence Finnish border management towards Russia? This thesis follows the Copenhagen school of security that proposed the tool of a discourse analysis in order to find out the differences between the Finnish and European policy approaches. In addition, policy practices were analysed as suggested by the Paris school of security. Another question to be answered within this work refers to the consequences that such restrictive border policies can inflict in the Finnish-Russian border situation in particular. The choice for the Finnish-Russian border is justified for being the longest external border within the EU and it divides two different socio-economic zones. My research has found out that the Finnish policy approach focuses on regional development in order to achieve economic balance in the border regions. In other words, Finnish external border policy follows the principle that economic cooperation is prominent especially in the border region areas and that severe external border controls impede financial interaction. This strategy is supposed to increase security by economics rather than by military means. However, the European Commission increasingly communicates proposals that focus on military and security aspects, such as the collection of biometric data. The Finnish approach of regional development to increase security within their own country is undermined by the European policy and it creates an instability between the two goals, economic cooperation and internal security.