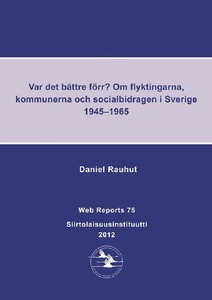 The findings indicate that the refugees faced the same challenges and problems as the present refugees struggle with. They had a lower employment rate and higher unemployment rate, they had insufficient social security coverage when sick or unemployed, and they usually worked in low income jobs and in jobs with high risks for work injuries.