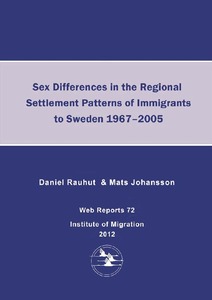 The aim of this study is to analyse the initial allocation of immigrants to Sweden 1967–2005 by sex in a regional perspective. Vacancies, unemployment and labour market participation as well as geographical areas with many previous immigrants are included in the analysis as pull-factors.

A multivariate cross-section OLS regression model is used to estimate the relative initial regional distribution of immigrants in Sweden in 1967, 1975, 1990 and 2005 by sex. The chosen method enables to control for a subset of explanatory variables and examine the effect of a selected independent variable when estimating the regional pull-factors to immigration. This study uses data collected from Statistics Sweden (SCB) and the National Labour Market Board (AMS). The data used is regional macro data, which does not contain information on single individuals. The findings suggest that sex differences in the settlement patterns of immigrants to Sweden did exist in 1975, 1990 and 2005, but not in 1967.