Finglish : in between two Languages, Language Debates, and Classification Norms 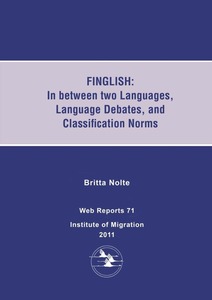 In the context of the globalization and localization of English, much has been said about the threatening influence English as a lingua franca has on local speech communities and identities. Recently, the rise of World Englishes as new, localized varieties of English has also come into focus. Within this debate, other language phenomena appear that are often neglected because of these two main tendencies of interest. One of these language phenomena is Finglish – “a mixture of English and Finnish” spoken by Finnish immigrants and their descendants in North America from the end of the 19th century onwards. Finglish can be seen as a localized form of English within a linguistically Finnish-dominant environment (as most Finnish immigrants settled in proper Finnish communities) that emerges within socially English-dominant surroundings, e.g. North America.

This particular language contact is marked by a very unique feature, namely structural incompatibility. Finnish, as an agglutinative language, differs enormously from English, a rather analytic or isolating language. Many sources give evidence of the great impact the socially-dominant English language has had on the structurally incompatible Finnish language, with the final outcome of Finglish. Therefore, this paper contributes the knowledge gained about this particular language phenomenon as a result of the localization of English in a Finnish linguistic environment to the current discussion about the globalization and localization of English.