The Potential Use of LNG in SSAB Raahe Steelworks 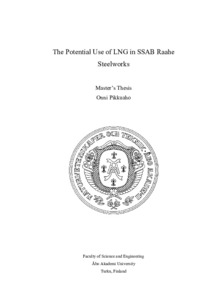 Pikkuaho, Onni
All rights reserved. This publication is copyrighted. You may download, display and print it for Your own personal use. Commercial use is prohibited.
Näytä kaikki kuvailutiedot
Julkaisun pysyvä osoite on
http://urn.fi/URN:NBN:fi-fe20201221101795

Steel has been produced for thousands of years, but its extensive, industrial use began during the industrialization, with the introduction of more efficient production methods, such as the blast furnace. The global consumption of steel has been steadily increasing until the present time, with the most significant growth occurring during the last couple of decades as steel is used in different areas, such as manufacturing and infrastructure. The consumption of steel has been considered a good indicator of economic growth, which can be observed in, e.g., the rising economies of Asia; in 2018, the global steel production was approximately 1.80 billion tonnes.

Due to the steady increase in steel consumption, the producers are not only required to be competitive and efficient, but to also find ways of reducing carbon dioxide emissions. As the steelmaking process works with molten metal or hot semi-finished particular, the production of liquid iron in the ironmaking process, which is essential to produce steel, is energy consuming. In this process, molten iron is obtained from iron ore and the most common process for this is a blast furnace. Simplified, the furnace is charged with iron ore and coke, with coke being the primary reductant and energy source of the furnace. As carbon is the primary reduction agent and fuel, the resulting carbon dioxide emissions have lately caused concern. This has led to a search for other less emitting alternative reductants that would also supply the furnace with adequate heat. One such alternative is (liquefied) natural gas, or LNG, which primarily consists of metane.

The subject of this study is to evaluate the potential of using natural gas for reducing the emissions at SSAB Raahe Steelworks, with focus put on the energy balance. Since the steelworks does not have access to natural gas by pipeline, the study is focused on the use of liquefied natural gas. The introduction of natural gas at different locations at the steelworks that are thought to influence the total emissions on-site is studied computationally. As the blast furnace needs considerable amounts of both heat and III reducing agent, this is the process where the biggest reduction in emissions is expected and it is therefore given most attention.