From Artisan Work to Automatization : Innovation in the Finnish Maritime Cluster 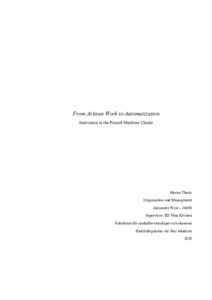 West, Alexander
All rights reserved. This publication is copyrighted. You may download, display and print it for Your own personal use. Commercial use is prohibited.
Näytä kaikki kuvailutiedot
Julkaisun pysyvä osoite on
http://urn.fi/URN:NBN:fi-fe20201218101456

Innovation is a concept that has received much recognition in the last few years and many authors have studied innovation to explain the fast development in different fields. Today innovation is seen as a key success factor for economic growth both within companies and in larger entities, such as clusters. Innovation as a concept has received a large amount of traction and there are almost as many definitions of the term as there are authors who are writing about the subject.

I have chosen three main innovation theories by Alf Rehn, Everett Rogers, and Robert Cooper and I have discussed the concept from many other points of views as well. Cluster theory has also been in focus for this thesis as I am asking the question whether the Finnish maritime field can be perceived as a cluster or not.

There have been earlier quantitative studies focusing on innovation within the Finnish maritime cluster. However, these studies discussed whether a qualitive study can give another perspective on innovation in the maritime cluster and therefore this thesis also has some importance to the field. The data I have collected and used in my thesis consist of ten interviews with people working in different positions and organisations within the Finnish maritime cluster. My interviews have been conducted in a semi-structured manner and as they range from a minimum of forty minutes to nearly two hours, they can be considered in-depth interviews. The Empirical data for my thesis was collected during the fall 2017 and spring 2018. I have interpreted the data from my interviews and re-told it as stories so the reader can get a better understanding of my interviewee’s role and situation within their organisations and the cluster. I also believe that the stories provide a connection to the narrative for the reader and that they support the thematic analysis on the whole.

What most of my informants had in common however, was that they often did not want to use the term “innovation” for development processes and incremental innovation as they tend to see it more as problem solving. What I noticed during my interviews was that many perceived the word “innovation” as something very grand and refined and therefore did not know how to speak of it directly at first.

When looking at the Finnish maritime industry from a cluster perspective I found out that many of the traditional characteristics were to be found and that we can refer to it as a hi-tech cluster. The people who took part in my studies all agreed that they had taken part in inter-organisational projects, collaborations or events and they all had some contact to either other organisations or the government. Some of my informants also said that one of the key-success factors to the cluster is the general hi-tech industry in Finland which the maritime cluster also benefits from. To conclude, through my research I found that innovation often was a result of change in the market or within the cluster and that many organisations adapt by innovating to find solutions to solve problems. Radical innovations also occur and according to my research they are often based on either reducing the environmental impact or creating more efficient solutions than what have been priorly in use. As my study consisted of only ten interviews, I do think that a deeper analysis would be needed to draw more definite conclusions.