Colonia Finlandesa : the Second Ship, the Rise and Fall of a Finnish Colony in Northeast Argentina and the Spread of Anomie 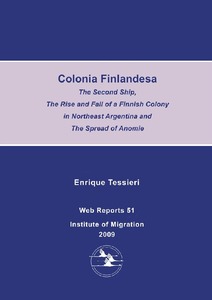 The aim of this thesis is twofold: a) with the help of new empirical data from the Centro de Estudios Migratorios Latinomamericanos (CEMLA) immigrant digital database in Buenos Aires, offer a comprehensive picture of the composition of the first Finns that founded Colonia Finlandesa in 1906; and b) study the environmental, economic and social impact that caused the demise of the Finnish colony in northeast Argentina as well as how anomie subsequently spread.

The economic failure of the colony, due mainly to self-inflicted environmental destruction and volatile agriculture commodity prices, had a severe impact on the small Finnish colony. While there are generous amounts of accounts in the oral histories and in my field notes that reveal that some colonists saw alcohol consumption as a problem of Colonia Finlandesa, we have not understood yet its role or how widespread it was. In studying this aspect of the former colony, Finnish values such as cleanliness-tidiness and norms on drinking played important roles in demarcating the marginal, or the non-anomics from anomics.