Gendered language in flux : The use of epicene pronouns in EFL and ELF writing 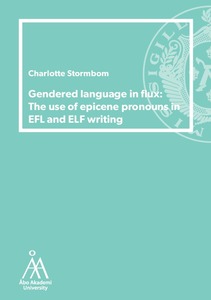 The dissertation includes four substudies, which examine how the use of epicene pronouns has changed over time, how the antecedent affects the pronoun choice, and how the pronoun choice is influenced by the language users’ L1 background. The materials consist of five corpora and an experiment. The corpus texts include: (1) argumentative essays written by university students from 13 L1 backgrounds, (2) academic papers written by L1 Swedish-speaking university students, and (3) articles published in Open Access (OA) journals.

Furthermore, the results show that the choice of epicene pronouns is affected by the antecedent type. Antecedents that are semantically plural, such as everyone, are more likely to co-occur with they than antecedents that are semantically singular, such as a person. The use of he and he or she displays the opposite kind of distribution. The gender expectancy of the antecedent also appears to have bearing on pronoun choice as generic he is more common with male-stereotyped nouns than with neutral or female-stereotyped ones.

The use of epicene pronouns is also influenced by the users’ L1 lingua-cultural background. Speakers of L1s with pervasive grammatical gender (e.g. Italian and Russian) seem more prone to using generic he than speakers of genderless languages (e.g. Finnish) and languages with a combination of natural and grammatical gender (e.g. Swedish and Danish). A possible reason for these tendencies is that the structure of the L1 leads to differences in learners’ conceptualisations of gender, in line with the framework of ‘thinking for speaking’, a weak form of linguistic relativity.