Scandinavia and Israel after the Holocaust 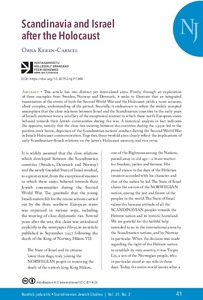 This article has two distinct yet interrelated aims. Firstly, through an exploration of three examples from Sweden, Norway and Denmark, it seeks to illustrate that an integrated examination of the events of both the Second World War and the Holocaust yields a more accurate, albeit complex, understanding of the period. Secondly, it endeavours to refute the widely accepted assumption that the close relations between Israel and the Scandinavian countries in the early years of Israel’s existence were a corollary of the exceptional manner in which these north European states behaved towards their Jewish communities during the war. A historical analysis in fact indicates the opposite, namely that the close ties existing between the countries during the 1950s led to the positive, even heroic, depiction of the Scandinavian nations’ conduct during the Second World War in Israeli Holocaust commemoration. Together, these twofold aims clearly reflect the implications of early Scandinavian–Israeli relations on the latter’s Holocaust memory, and vice versa.