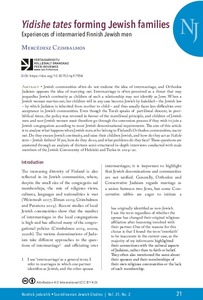 Jewish communities often do not endorse the idea of intermarriage, and Orthodox Judaism opposes the idea of marrying out. Intermarriage is often perceived as a threat that may jeopardise Jewish continuity as children of such a relationship may not identify as Jews. When a Jewish woman marries out, her children will in any case become Jewish by halakhah – the Jewish law – by which Judaism is inherited from mother to child – and thus usually faces less difficulties over acceptance in Jewish communities. Even though the Torah speaks of patrilineal descent, in post-biblical times, the policy was reversed in favour of the matrilineal principle, and children of Jewish men and non-Jewish women must therefore go through the conversion process if they wish to join a Jewish congregation according to most Jewish denominational requirements. The aim of this article is to analyse what happens when Jewish men, who belong to Finland’s Orthodox communities, marry out. Do they ensure Jewish continuity, and raise their children Jewish, and how do they act as Yidishe tates – Jewish fathers? If yes, how do they do so, and what problems do they face? These questions are answered through an analysis of thirteen semi-structured in-depth interviews conducted with male members of the Jewish Community of Helsinki and Turku in 2019–20.