Bound to hospitality: An asymmetry of power in the Finnish church asylum movement 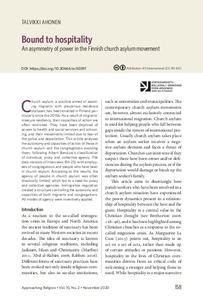 Church asylum, a practice aimed at assisting migrants with precarious residence statuses, has been enacted in Finland particularly since the 2010s. As a result of migrants’ insecure residency, their capacities of action are often restricted. They have been deprived of access to health and social services and schooling, and their movements limited due to fear of the police and deportation. This article analyses the autonomy and capacities of action of those in church asylum and the congregations assisting them, following Albert Bandura’s classification of individual, proxy and collective agency. The data consists of interviews (N=25) with employees of congregations and people who have been in church asylum. According to the results, the agency of people in church asylum was often drastically limited, which led to a need for proxy and collective agencies. Immigration regulation created a structure controlling the autonomy and capacities of both migrants and congregations. All modes of agency were inventively applied.