Reflection on the reflective ethics of charity 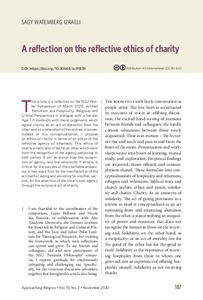 This article is a reflection on the NSU Winter Symposium of March 2020, entitled ‘Feminism and Hospitality: Religious and Critical Perspectives in dialogue with a Secular Age’. It contends with moral judgments which regard charity as an act of alienation from the other and as a reiteration of hierarchies of power. Instead of this conceptualisation, I propose an ethics of charity in terms of an ethics of the reflective agency of otherness. This ethics of charity entails acts of aid for an other which stem from the recognition of the agency pertaining to both parties. It will be shown how this recognition of agency, and the reciprocity it entails, is critical for the success of the charitable endeavour in two ways: first, for the manifestation of the act itself of aiding and providing for another; second, for the assertion of the other’s own agency through the reciprocal act of charity.