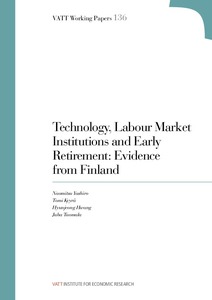 There are two major barriers to increasing employment of older workers. First, older workers engaged in codifiable, routine tasks are particularly prone to the risk of being displaced by computers and robots. Second, several countries have in place various labour market institutions that encourage early retirement, such as exceptional entitlements or looser criteria for unemployment and disability benefits applied to older individuals. We present evidence that these two factors reinforce each other to push older workers out of employment. We find that older workers who are more exposed to digital technologies are more likely to leave employment, and that this effect is significantly magnified when they are eligible to an extension of unemployment benefits until the earliest age for drawing old age pension. Furthermore, our findings imply that a policy reform that tightens the eligibility for the benefit extension would increase mostly the employment of older workers that are more exposed to digital technologies.