Canadian Refugee Policy & Sexual Orientation : an Analysis of an Innovative yet Implicit Guardian of Freedom 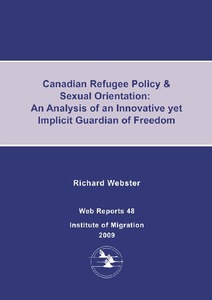 In many countries around the world, homosexuality continues to be labeled a mental disease, penalized as a crime by the law, condemned as a sin by religious institutions, and even punishable by torture and execution by state authorities. As such, refugee claims based on sexual orientation have began to rise in such ‘Western’ states as Canada that protect sexual minorities. While there is no country in the world where sexual minorities are entirely free from harassment and oppression, thousands of claims have been filed with the belief that Canada is a beacon of hope and freedom. Through a comprehensive analysis of the five stages of the policy process, this research will prove that while Canada must establish clearer, more equitable guidelines than those previously developed in the landmark case of Canada v. Ward for assessing a refugee claim based on sexual orientation, the country has upheld its signatory duty to the international community to protect asylum-seekers with a ‘well-founded’ fear of persecution.