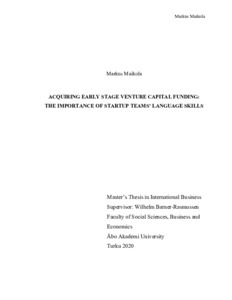 One implication of this study is the existence of unconscious factors that might affect the outcome of the investment decision, which can be connected to the spoken language between venture capital firm and startup. Another implication is that language should be consciously considered already in the pre-investment phase to obtain a better working relationship between venture capital firm and startup in the post-investment phase.