Distribution and Characterization of Suspended Particles in Pohjanpitäjänlahti Estuary 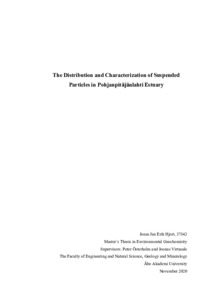 Suspensions of eroded minerals and organic matter, as well as particulate and dissolved elements such as Fe and Mn, are transported from land to sea and ultimately deposited in sediments. These materials have a strong impact on biogeochemical processes, including nutrient cycling in coastal sea area sand in sediments. Hence, it is important to understand the factors controlling their transport and sedimentation. For iron (Fe) and manganese (Mn), redox driven precipitation and re-mobilization of oxides is an important process in coastal environments. They may occur in a soluble form when discharged in to the estuary, and precipitate into particles in the brackish high-pH surface waters. If sedimented, Fe and Mn are dissolved under anoxic conditions in sediments or near-bottom water. The dissolved Fe and Mn in the porewater may then move upwards in the sediment and further to the water column until they reach oxidizing conditions, and precipitate as oxides. These oxides may co-precipitate phosphates (reducing eutrophication) and/or function as electron acceptors in organic matter respiration in the absence of oxygen.

As a part of a larger project, in which suspended particles and estuarine biogeochemistry are studied, the aims of this study are (1) to quantify and characterize suspended in organic particles in an estuarine environment, (2) to facilitate the use of a LISST-100X suspended particle size analyzer in in situ marine studies, and (3) to understand the redox driven Mn cycling in the estuarine environment. The study site is the Pohjanpitäjänlahti estuarine transect in southern Finland (Gulf of Finland). A total of 12 study sites (A-C,C2, D-K) were visited along the estuarine transect during the FINMARI cruise in October 2018 on board the r/v Geomari of the Geological Survey of Finland. Continuous particle size distribution profiles of the water column at the study sites were obtained by the LISST-100X instrument, which measures in-situ sizes and volume concentrations of particles suspended in the water column by laser diffraction method. Continuous salinity and temperature profiles were collected b by an EXO2multiparametersonde. Water samples from selected depths were collected at each station and filtered with a precombusted 0.7 μm fiberglass filter. From the retentates collected on the filters, particle sizes, particle compositions and element associations were characterized with scanning electron microscope (SEM) and energy-dispersive X-ray spectroscopy (EDS). The suspended particles were a mixture of mineral grains, diatoms and organic material, all with sizes below10 μm dominating. Larger particles were typically aggregates of clay minerals and organic matter. The bottom waters were generally dominated by coarser particles (103–200μm) while finer particles (1,0–10,2 μm) were mostly found in the surface waters. Due to seasonal variations and topographical irregularities a part of the estuary experiences hypoxic/anoxic conditions in the bottom water. In these waters, Mn concentrations exceed the average amounts along the rest of the estuarine transect. Manganese morphotypes of varying sizes (mostly 3–7 μm) and with distinctive large cauliflower and small star-shaped morphologies were also found in sections of the estuary.