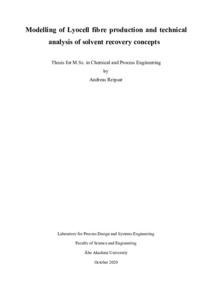 Lyocell is a type of man-made cellulosic fibre that is produced via direct dissolution of dissolving pulp in a non-volatile amine oxide or ionic liquid. The dissolved pulp is regenerated into long fibre strings by extruding the dissolved mixture through an air-gap into a water bath. The fibres coagulate in the bath and are later drawn into another water bath where they are washed until the solvent is completely removed. The Lyocell process is known as a sustainable way of producing textile fibres due to its low emissions, water consumption and land-usage. It is distinguished by its very high recycling rate of solvent, which in some cases has been reported to be above 99%.

All process concepts were set to perform at a 99% solvent recovery rate, thus creating a scenario for an equal comparison of the pre-requisites for each of the recycling concepts. The concepts were evaluated based on the purity of the recovered solvent, energy demand and overall complexity. Complexity is based on the number of process steps and design parameters, as well as dependence on chemicals. The least complex combination of technologies is Concept 1, followed by Concept 3, 2, 4 and 5. Concept 4 and 5 can provide a highly concentrated solvent stream (99%) with lower amounts of impurities than the other concepts. Concept 1, 2 and 3 result in very similar solvent purity rates. Concept 2 has the lowest steam demand, followed by Concept 1, 3, 5 and 4. The model results are in reasonable accordance to published data on water and energy demand of industrial Lyocell fibre production.