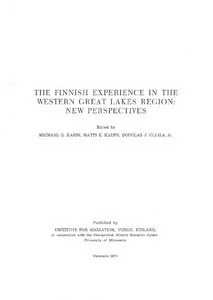 New approaches to immigration history
Historians and ethnicity: the new social history / Clarke A. Chambers
Emigration research in Finland / Vilho Niitemaa
II The exodus from Finland
Finnish emigration prior to 1893: Economic, demographic and social backgrounds / Timo Orta
No land for Finns: Critics and reformers view the rural exodus from Finland to America between the 1880's and World War I / A. William Hoglund
III Patterns of settlement and institutional growth in the new land
The Finns in the copper and iron ore mines of the western Great Lakes region, 1864–1905: Some preliminary observations / Matti E. Kaups
Fishermen on strike: Finnish workers and community power in Astoria, Oregon 1880–1900 / Michael Passi
The development and distribution of Finnish consumers' cooperatives in Michigan, Minnesota and Wisconsin, 1903–1973 / Arnold Alanen
Process and product: Problems encountered by the Finnish immigrants in the transmission of a spiritual heritage / WaIter Kukkonen
IV Case studies in value conflict
Copper country Finns and the strike of 1913 (Response by Raymond Alvar Wargelin) / Arthur Puotinen
From socialism to industrial unionism (IWW): Social factors in the emergence of left-labor radicalism among Finnish workers on the Mesabi, 1911–19 / Douglas Ollila, Jr.
The Finns and the crisis over »Bolshevization» in the Workers' Party 1924–25 / Auvo Kostiainen
Struggle on the cooperative front: The separation of Central Cooperative Wholesale from communism, 1929–30 / Michael Karni
V Disaffection: Finns leave America
Problems of research in Finnish re-emigration / Keijo Virtanen
Emigration of Finns from north America to Soviet Karelia in the early 1930's / Reino Kero
Summation
Concluding remarks / John I. Kolehmainen.

This volume is an excellent example of fruitful collaboration between American and European scholars in studying the Atlantic migration. By their very nature, migration studies require a dual perspective: that of the country of origin and that of the country of destination. The history of immigration has too often been written from an American point of view, slighting the importance of the European dimension. It was the genius of the conference on “The Finnish Experience” that it provided for the first time a comprehensive view from both sides of the Atlantic of this phenomenon. Its success provides migration scholars with a model for reconsideration of the migrations from other countries.

Published by Institute for Migration, Turku, Finland, in cooperation with the Immigration History Research Center, University of Minnesota.