Cellular regulation of the Notch signaling pathway by Notch-interacting proteins 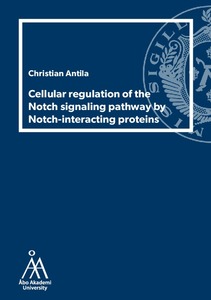 The Notch signaling mechanism is a crucial regulator of stem cells during development and tissue regeneration. Transcriptional activation of Notch target genes requires cleavage of the Notch receptor in response to ligand binding, production of the Notch intracellular domain (NICD), NICD migration into the nucleus, and assembly of a transcriptional complex. This thesis focuses on the stress-induced interaction of Notch with the small ubiquitin-like modifier (SUMO) and the effect of this interaction on the differentiation of neuronal stem cells in the central nervous system (Study I), and the interaction of Notch with the cytoskeletal intermediate filament (IF) keratin proteins in the differentiation of intestinal epithelial cells (Study II). Study (III) is a review and focuses on discussing different aspects of various post-translational modifications (PTM) of Notch.

The Notch receptor interacts with several post-translational modifiers, but the exact mechanisms and consequences of these interactions remain elusive. PTMs of Notch regulate its trafficking, turnover, and transcriptional activity. Study (I) presents a direct interaction between Notch and SUMOduring cell stress in the form of heat shock or the presence of the protea some inhibitor termed bortezomib. The sumoylation took place in the nucleus where SUMO was conjugated to the transcription factor Suppressor of Hairless (RBPJ/CSL)-associated domain(RAM) of NICD. In canonical Notch signaling, the interaction between RAM and the transcription factor Recombination signal binding protein for immunoglobulin kappa J region (RBPJ)/CSL is a prerequisite for activation of Notch target genes. However, the sumoylation site in the RAM domain was easily accessible for sumoylation without affecting the RAM-CSL interaction or any other component within the DNA-bound transcriptional complex consisting of NICD, CSL and the coactivator Mastermind-like (MAML). Neitherdid the SUMO-conjugating protein, termed ubiquitin conjugating enzyme 9 (Ubc9) interfere in the NICD-CSL-DNA interactions. Therefore, NICD sumoylation occurred in the transcriptional complex without disrupting the complex. Cellular stress-induced sumoylation of NICD enhanced the protein level and nuclear localization of Notch, but nevertheless still dampened its transcriptional activity. On a mechanistic level, NICD sumoylation promoted the recruitment of histone deacetylase 4 (HDAC4) to the transcriptional complex to suppress Notch target gene expression.

The NICD sumoylation-mediated repression of Notch target genes was abolished by expression of a sumoylation-deficient mutant Notch construct in cells in vitro. Furthermore, the stress-inducible sumoylation provided a regulatory mechanism for dynamic Notch target gene expression also in vivo. In the developing central nervous system of chicken embryos, the expression of Notch target genes was repressed upon cellular stress by wildtype Notch, whereas the target gene activation capacity was retained by a sumoylation-deficient Notch mutant. In addition, consequent differences between the wildtype and the sumoylation-deficient Notch regarding tissue differentiation were displayed. The findings ofthe stress-inducible sumoylation of NICD in study (I), revealed a novel context-dependent regulatory mechanism of Notch target gene expression.Study (II) of this thesis presents a direct interaction between Notch and keratins and the outcomes that this specific interaction mediates on the proliferation and differentiation of colonic epithelial cells. Keratins are cytoskeletal intermediate filament (IF) proteins and have essential roles in cellular stress protection and mechanical support of epithelial tissues. 8 K8, K18 and K19 constitute the largest group of the keratin isoforms that are expressed in the colon.K8 is along with K18 the main component, not only of all keratin isoforms, but also of the entire IF cytoskeleton and is therefore also the main IF protein of simple layered epithelia. K8 is localized preferentially in the cytoplasm and is the most common type II keratin, pairs predominantly with the type I K18, and is mainly expressed in the epithelia of the intestine, liver and exocrine pancreas. Earlier it has been known that mice lacking K8(K8-/-mice) develop colitis, decreased apoptosis and significant hyperproliferation of colonic crypt epithelial cells, but the effect of the loss of K8 on intestinal cell differentiation had so far been unknown. Notch in turn has been known to be a critical regulator of colonic epithelial cell differentiation. In study (II), we showed that K8 together with its polymeric partner K18 regulated Notch signaling activity and cell differentiation in the epithelium of the large intestine.K8 bound directly to Notch1 in colonic epithelial cells, both in vitro in cell culture, and in vivo, displayed in immunoprecipitations and proximity ligation assays. In vitro, the interaction resulted in enhanced Notch levels and activity in a dose-dependent manner, but unlike the Notch-SUMO interaction discovered in study (I), which resulted in repressed Notch target gene expression, the Notch-K8/K18 interaction in study (II) led to increased expression of specific Notch target genes. Accordingly, in vivo in the colon epithelium, K8-/-mice had decreased levels of both the complete form of Notch, called full length Notch(FLN), and NICD, and also repressed expression of the Notch target genes Hey1 and Hey2. The effect of the absence of K8 on Notch activity was observed in cultured colorectal cancer cells by deleting K8 with CRISPR/Cas9. This knockout of K8 led to the downregulation of FLN and NICD levels and reduced Notch downstream target gene Hey1 expression, which was rescued with re-expression of K8/K18. In vivo, the differentiation phenotype in K8-/-colonic epithelium was shifted from an enterocyte cell fate towards increased goblet cells and enteroendocrine cells. Moreover, in the colonic crypts, K8 depleted mice developed increased amount of transit amplifying (TA) cells from which the terminally differentiated cells originate. In study (II), Notchinteracted with K8/K18 and regulated Notch signaling during differentiation in the colonic epithelium.