Properties of raw glazes - The impact of composition, firing and functional coatings 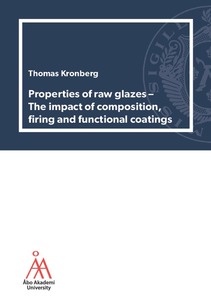 Raw glazes, i.e. glazes mixed from oxides and minerals, are cost-effective alternatives to fritted compositions for ceramics fired at a high peak temperature (> 1150 °C). Raw glazes are mainly used for sanitary ware and porcelain, but also e.g. for dense floor tiles. Typically, many of the raw materials come from local mining plants and thus are cost-efficient alternatives.

New demands like replacing raw materials to more environmentally friendly ones, using lower top firing temperatures, or going to shorter firing cycles all require an adjustments of the glaze composition. For achieving a high-quality surface, a thorough understanding of the influence of different raw materials on the sintering, the melting as well as on the crystallization behaviour of the glaze is essential. The phase composition of the fired raw glaze depends on the kinetics of the various raw material reactions during the heating and soaking periods at the top firing temperature as well as on the phase changes taking place during the cooling period.

Although ceramics are considered to provide easy-to-clean surfaces, considerable effort and money are spent on cleaning the soiled surfaces. Exposure to chemical agents or mechanical wear can alter the surface structure and thereby diminish the cleanability during the life cycle. Functional surfaces have been developed to increase the anti-soiling and cleanability properties of traditionally glazed surfaces.

These new requirements and changes have led to the need for a better understanding of the melting behaviour and surface modification to achieve surfaces with desired appearance and performance.

The results from the study of the melting behaviour showed that dolomite and wollastonite in the recipe enhanced the melting behaviour of the glaze at around 1200 °C. However, when the amount of the alkaline earths CaO and MgO increased, a matte surface appearance was obtained. The effect of adding these alkaline earths through dolomite and wollastonite on the melting behaviour and surface properties was explored. Twenty-five experimental glaze compositions (Series III) were used in this study. Both the total content and the ratio between wollastonite and dolomite were found tocontrolthe melting behaviour. The fusibility was increased with wollastonite, and thus, the CaO content in the glaze. Also, MgO introduced as dolomite increased the fusibility of the glazes. In fast-firing, the most pronounced effect was found when the MgO content was around 2 wt%. The main crystalline phases in the Series III glazes were wollastonite and diopside. The chemical durability of the glazes containing wollastonite crystals at the surface was poor in acidic solutions. The wollastonite crystals were rapidly attacked and reacted through incongruent dissolution of calcium and leaving a silica-rich remnant at the surface. The diopside crystals showed excellent durability in all acidic to alkaline the solutions. However, the amorphous phase in the glazes with high contents of alkaline earths was heavily attacked in the acidic solutions. Although the overall acid durability of the wollastonite-containing glazes was low, the excellent properties of the diopside crystals are encouraging for further studies of manufacture of diopside-based matted raw glazes, especially in a modified composition range with higher silica contents to ensure better durability.

The results obtained in this study give valuable additional information and new tools to design glaze compositions with desired surface characteristics for different firing schedules. The models can be utilized when designing new glaze compositions for changed requirements or when comparing the melting behaviour of different raw glazes. Also, the calculated trends can directly be adapted to practical glaze firing processes. The results can also be applied to adjust the glaze composition for given firing cycles in order to improve the chemical durability and to achieve the desired microstructure through controlled surface composition. The results can also be used to estimate the criteria for tailoring additional functional coatings and glaze surfaces for a long-term effect on cleanability in everyday environments.