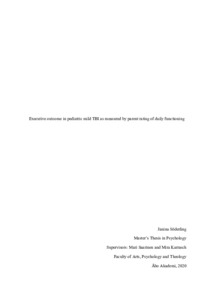 The existing literature on neurobehavioral outcomes after a pediatric mild traumatic brain injury (mTBI) is conflicting, despite of its common occurrence. The present study examined parent-rated executive functioning (EF) of children with mTBI at 1–3 months after injury compared to peers with an orthopedic injury (OI). The study sample consisted of 51 children, 37 with mTBI and 14 with OI, aged 7–16 years at the time of the injury. Parent version of Behavior Rating Inventory of Executive Function (BRIEF) questionnaire (Gioia, Isquith, Guy & Kenworthy, 2000) was used to measure the EF of the children. Additionally, a Full-Scale Intelligence Quotient (FSIQ) score was calculated for all children. Three different summative scores were retrieved from the BRIEF questionnaire and set as dependant variables in the following analysis. A multivariate analysis of covariance was conducted to analyse the effects of injury type (TBI, orthopedic) on parent-rated EF skills when controlled for FSIQ. The results showed no significant group differences on EF skills. A subsequent case-by-case analysis showed that despite of the lack of a group difference, a higher percentage of the children in mTBI group compared to the OI group had clinically significant BRIEF scores (T score ≥ 65) on all three of the composite scores. The results from this study do not support the hypothesis that children with mTBI as a group would show more EF problems in their everyday life at 1–3 months after injury compared to their peers with orthopedic injury. Nevertheless, a percentage-wise larger sub-group of children with mTBI than with OI showed clinically elevated BRIEF scores, suggesting that some children with mTBI develop executive problems. This highlights the need for careful individual assessment, as a small percentage of the mTBI children could be in need for support.