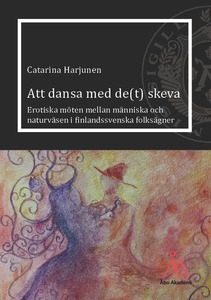 I define ”erotic” as a spectrum which starts at a slightly intangible ”ambience” and ends with ”results”, i. e. the children produced in the encounters. The full spectrum is simplified as ambience-gaze-action-results, where ambience is something that can permeate the whole chain of events. Gaze is the objectification of the body by looking at it, and actions include everything from moving towards the body to sexual intercourse. The word queer is used in the sense of something that is askew and off, not in the sense of sexual identity. I chose the Swedish word skev which implicates that which is distorted and perverted. The dissertation’s title, Att dansa med de(t) skeva, denotes a dance with those who are queer as well as that which is queer. It refers to Donna Haraway’s term dance of relating, a way to express the complex relationship between companion species.

The nature spirits on the other end of the encounters with humans were supernatural beings that were imagined to live in the forest or in various bodies of water. They include a female forest spirit called a skogsrå, her equivalent in water sjörå, a male water spirit called näcken (the neck or nix), and trolls. The basis for selecting legends about these specific beings was that there is a compelling tradition of story-telling where they are sexually involved with humans. I also wanted to use spirits that were associated with nature, to better facilitate the exploration of the links between sex and sexuality, and the nature/culture dichotomy.

The material used consists of 116 folk legends, recorded mainly around the year 1900. One of the main actors in the field of collecting folklore was (and still is) The Swedish Literature Society in Finland, founded in 1885 (Svenska litteratursällskapet i Finland, SLS). The legends used as the dissertation’s material were collected mainly by SLS. Some of the material was collected by persons or organizations affiliated with SLS, within that beforementioned time frame. SLS had strict rules concerning the collection of folklore: visit the most remote villages in the countryside, speak to the oldest inhabitants, note the names of those villages and informants, and write down the information received in the vernacular. The general consensus among folklorists was that folklore was something that was vanishing with the modernization of the world, and that only old people could remember how things were. The older the informant, the more ”genuine” the tale or song. Because of all these criteria, the records are fairly similar in form, and they reflect a tradition. The idea was to find an ”original” of every tradition, and to see how the traditions had spread. However, the collectors and scholars of the time did not reflect on the function of the traditions, which therefore was not noted. When the material had been recorded and handed in to the archive at SLS, it was systematically organized by archivists, which means that they decided what genres to assign the narratives. These categorizations have later been questioned and revised.

Methodologically I chose a contextual close reading which means that I view the legends as texts which are more than just a way of telling a story: they say something about the context, the society, which they originate from. I have familiarized myself extensively with earlier research on the 19th century rural countryside in Finland to better understand what kind of society originated the legends. I maintain that building the context has been a crucial part of a deeper understanding of the legends.

I also argue for considering the relationship between humans and nature spirits as that of companion species, as outlined by Donna Haraway. As companion species, humans and spirits share a common past, present, and future. They have evolved together, influencing each other for better or for worse, and are what they are today because of each other. A companion species is not an unproblematic comrade, but can be quite troublesome at times, but nevertheless, the relationship is there and demands attention. This posthumanist approach to the relationship between humans and nature spirits demonstrates how humans relate to other species but also to themselves, because spirits were considered to be a mirror image of humans, and also how the idea of humans as the crown of creation is or should be questioned. I view the companion species relationship on two levels: on meta level in the legends themselves, and on narrator level, as story-telling about trolls and fairy folk has certainly not gone away but continues to enthrall in the form of novels, TV shows, and movies.

The analysis is shaped around the idea of how a relationship between a man and a woman was ideally to be formed: boy meets girl, boy courts girl, boy marries girl, girl births baby. The analysis is centred around themes of appearance, actions, and how marriage and having children culturally are signs of leading a ”good” life. The appearance of the spirits is described in terms of ”normal” looks and clothing. The female nature spirits are often said to be exceptionally beautiful, and dressed in fine clothing that was beyond the financial reach for the peasantry. The spirits are described as human-looking, but their finery and otherworldly beauty tell us that they are not human. The place and time of the encounter is important in interpreting the normal: respectable people did not go into the forest in the middle of the night, dressed in their finery. By doing so, the spirits are exposed as queer and cannot pass for human.

Actions, or behaviour, is another way of defining the normal. The spirits, especially the female ones, are often perceived as nature incarnate. They are complex characters who sometimes behave unladylike, which could perhaps be expected of them due to their ”untamed nature” but they still cause repulsion with the men encountering them. Female spirits are still expected to conduct themselves in a respectable manner and if they don’t, the men are free to hurt or even kill them. Spirits who are sexually forward are seen as the worst kind of female, one that must be controlled and punished – although her sexual appetite is enthralling and causes a certain degree of mirth as well.

The question of marriage and children is quite central in the analysis. For a couple to engage in socially accepted sexual relations, matrimony was imperative. After getting married, the couple was expected to start producing offspring. Getting married and becoming a parent was a rite of passage: a boy became a man, a girl became a woman. Especially for women, it was crucial to also become a mother. The supernatural origins of the mothers is seemingly not an issue in legends. The concept of the family in 19th century rural Finland was different from today: the household, including the help, was the basic unit of society. Still, the idea of a married couple having children was solid. The encounters between nature spirits and humans very rarely led to marriage and children, and when it did, the marriages were rarely happy. The children produced were sometimes out of wed-lock, sometimes legitimate children, and very little is told of them. They are notably all boys and one is described as physically very strong. Getting married to a human is for a spirit an attempt at becoming human, of trying to pass as human. One troll girl even has herself christened, despite the general fear trolls and other spirits have for the church and its symbols.

The encounters between spirits and humans do not follow the line of socially sanctioned relationship progress that suggests a straight line of encounter-courting-marriage-children. The female nature spirits often behave in a way which was not in accordance with the social rules of conduct for women at the time, thus making them seem unruly, exotic, sexual, or just ”queer”, that is, unwilling or unable to fit into society. I see the existence of the spirits in an erotic narrative tradition as a crack in the heteronormative structure that presupposes that normality is based on the ”right” kind of desire and life (the not queer one). In an acceptable, normative chain of events, there is no room for queer desire in the form of sex with spirits. But the spirits are there, in a tradition where they have sexual encounters with humans and even form families.

I also discuss how conceptions of sexuality and sex have been associated to notions of nature and culture. The binary division of nature and culture that is so prominent in the west includes the idea that nature has something untouched, virginal, and wild. This view is not fully present in the material, however, as extensions and protectors of forest and water, the spirits can be interpreted against a backdrop of an untamed nature in need of control. Concurrently, it could be argued that the material suggests an awareness of nature as both giving and taking. The spirits are a part of this: they were guardians of forest, lake, river, and sea, and they watched humans who ventured outside of the habited areas to ensure that they behaved appropriately, and they had power over the prey that humans desired.

The spirits can be viewed as an expression of human comprehension of ecological balance. It is easy to wax poetic about peasant society’s relationship with nature and imagine that there was a greater respect for and appreciation of the earth before industrialization, but it is not that simple. The individual dependancy on what could be grown, hunted, and caught was greater than it is today. The spirits were a part of that individual at-tempt at influencing the world around oneself while trying to make a livelihood. According to tradition, if the spirits were shown respect, they would repay you with luck in hunting or fishing, but they would sabotage your livelihood if treated poorly. When faced with sexually active female spirits, however, men seem to have had a greater right to cause injury to the spirits. The female nature spirits can be interpreted as tolerable and ”straight” when they toe the line for what is acceptable, but as soon as their behaviour take them outside of the frame of decent female behaviour, they are no longer worthy of respect. Thus, the patriarchal structure could be said to remain in place, although there are cracks through which the queer shines through.