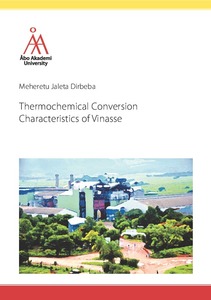 Vinasse, also known as stillage or spent wash, is an effluent from the distillery plant of the integrated sugar-ethanol process. It is characterized by an acidic pH, a black-reddish color, and being a dilute effluent with a dry solids content of 5–10 wt %. In addition, vinasse presents very high BOD (biological oxygen demand) and COD (chemical oxygen demand) due to its organic constituents, and it is generated at a rate of 10–15 liters per liter of ethanol produced.

Today, vinasse is mainly used in fertirrigation — providing the soil with water and at the same time fertilizing the soil for sugarcane plants. However, depending on the location and soil condition, the use of untreated or partially treated vinasse in fertirrigation creates the potential for environmental damage, including emission of greenhouse gases and pollution of soil and water. Moreover, utilization of vinasse in fertirrigation alone is not sufficient to address the total amount of vinasse produced. Thus, there is a need for alternative vinasse utilization options, such as thermochemical conversion.

To properly establish the background for this study, it was important to determine the flows of ash-forming elements in a typical integrated sugarethanol mill. Mass and energy balances for an integrated sugar-ethanol mill were developed using mill data and by analyzing samples of biomass and biomass residues from the mill. The results revealed that although the vinasse, the final by-product from the mill, contains only about 2–3% of the mass and energy, it contains the highest concentration of ash-forming elements from the cane. The dominant cationic ash-forming elements in the vinasse are K and Ca, whereas Cl and S are the major anionic inorganic elements.

Product distribution and yield during fast pyrolysis of vinasse at 400 and 500 °C were determined using a drop-tube-type reactor, a reactor with a charVII retention system inside. The results showed that the water-free pyrolysis-oil yield on a wt % dry vinasse basis was about 12, independent of the pyrolysis temperature. The low pyrolysis oil yield was probably due to the high potassium content of the vinasse. Alkali metals are known to catalyze the degradation of pyrolysis oils in the vapor phase, resulting in an increase in the gas and water yields and a decrease in oil yield. The char and gas yield trended with temperature in a fashion similar to that which occurs with other biomass fuels: the char yield decreased, and the gas yield increased at 500 °C when compared to 400 °C. About 45–55% of the carbon and more than 85% of the potassium in the vinasse were retained in the chars. The low bio-oil yield and high water content of the bio-oil indicate that fast pyrolysis is not an attractive option for the production of bio-oil from vinasse. However, fast pyrolysis may be an excellent means for the production of bio-char with a high K content for fertilizer and for sequestering approximately half of the carbon from the vinasse. Moreover, the recovery of most of the K with the chars suggests that the liquid and gaseous pyrolysis products can be burned in a boiler with lower levels of ash-related problems than the original fuel. This would allow for energy and inorganic chemicals to be recovered from vinasse while reducing some of the limitations of applying wet vinasse to agricultural lands.

Gasification of the vinasse chars by CO2 at temperatures between 600 and 800 °C in a DSC-TGA was found to be dominated by volatilization of inorganics. Volatilization of the inorganics was significant at temperatures over 700 °C. Reduction of alkali carbonates and sulfates by carbon, evaporation of alkali chlorides, and autogasification are the main mechanisms by which the char sample weight loss occurred in the DSC-TGA. In addition to gasification of the char carbon by CO2, the reduction of alkali carbonates and sulfates and autogasification were responsible for the consumption of the organic carbon from the chars. However, the vinasse char gasification rate was independent of CO2 gas concentration in the gas concentration range considered, probably
due to saturation of char surfaces with CO2.

For other agro-industrial biomass fuels, i.e., kiwi branches, olive branches, grape pomace, torrefied grape pomace, and sugarcane bagasse, the char sample weight losses in the TGA at 800 °C in CO2 were mainly due to gasification of char carbon by CO2. These fuels had ash contents of about one order of magnitude lower than that of the vinasse. The char gasification reactivities of these fuels increased almost linearly with the K/C ratio in the range of 0% to 80% char conversion. After the gasification rates reached a maximum at a K/C mole ratio of around 0.1, the rates started to decrease, suggesting that the catalytic char gasification rates might have been saturated with respect to K. Chars from one of the fuels, sugarcane bagasse, had a high Si content and a lower gasification reactivity. Formation of potassium silicates during gasification, which makes the K unavailable for catalytic reactions, may be the reason for the lower reactivity of chars from this fuel. For the vinasse chars, however, it was not possible to determine the influence of the K/C ratio on the gasification rate with the present experimental methods. This was because the char weight losses during gasification were dominated by release of inorganics hampering determination of the amount of char carbon gasified as a function of time, and consequently, determination of char conversion and gasification rates.

The release of inorganics during combustion and gasification of vinasse at 900 °C in a single-particle reactor (SPR) was determined by analyzing the ashes from the combustion/gasification experiments for their inorganic content. Similarly, to determine the levels of inorganics released from vinasse chars during the DSC-TGA experiments at 600–800 °C in CO2 and N2 gas atmospheres, the residues remained after the DSC-TGA experiments were also analyzed for their inorganic content. The DSC-TGA was also used to investigate the release of inorganics from the vinasse chars as a function of time and temperature. Results of analyses of the ashes/residues from the SPR/DSCTGA showed that significant levels of the K, Na, Ca, Mg, S, and Cl in the vinasse and its chars were released under combustion, gasification, and inert gas conditions. However, none of the Si, Al, Fe, and P in the vinasse was released under the present experimental conditions although 50–70% of the Si, Al, and Fe and almost all of the P in the vinasse were H2O- and NH4Ac-soluble. Holding time, temperature, and gas atmosphere were found to have strong influences on the release of K and Cl from vinasse and its chars. It was observed that temperatures of 700 °C and above and longer holding times increased the release of K and Cl considerably, and the release levels were more pronounced in reducing gas conditions than in oxidizing conditions. However, Cl release was found to be higher in CO2 than in N2. This latter observation needs further investigation.

The initial or first melting temperature (T0) for the vinasse ash was determined using a DSC. Thermodynamic calculations were made with FactSage to obtain the fraction of melt as a function of temperature. The DSC results revealed that the initial melting temperature of the vinasse ash is in the range of 640–645 °C. Moreover, results from the FactSage calculations showed that 15% and 70% of the ash is molten at about 650 °C and 670–690 °C, IX respectively. However, it was observed that the ash melt fraction never reaches 100% below 1200 °C due to the presence of high-temperature melting oxides in the ash.

The release of significant levels of K and Cl from the vinasse and the lowtemperature melting of the vinasse ash suggest that vinasse is a difficult fuel for conventional combustion and gasification processes. In particular, the use of a fluidized bed technology — a well-established technology for combustion or gasification of solid fuels — for heat and power production from vinasse seems unlikely due to the high risk of bed agglomeration. Nevertheless, some potential alternative options are worth investigating. One option is the hightemperature entrained flow gasification process. A pilot-plant scale of this process has been demonstrated to be feasible for the production of syngas and recovery of inorganic chemicals from black liquor, a by-product from pulp mills that shares some fuel properties with the vinasse. Another option is combustion of vinasse in a black liquor recovery boiler type in which the vinasse is spray-fed into the boiler in coarse droplets. This system minimizes the formation of ash fumes and hence, the ash-related problems in the boiler, and allows most of the inorganics from the vinasse to be recovered as bottom ash for use as fertilizer.