Explicit results in theory of zeros and prime numbers 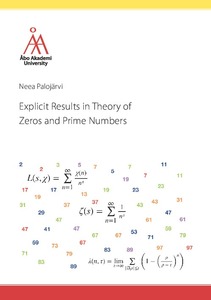 This thesis is comprised of three articles in which we prove explicit estimates for different number theoretical problems.In the first article we derive an explicit Riemann-von Mangoldt formula for the Selberg class functions. Even though this kind results were already known for some functions in the Selberg class, this is the first explicit estimate which covers the whole Selberg class.
Then, in the second article, we study the t-Li coefficients for a quite general set of functions and their connections to zero-free regions. We prove that non-negativity of certain t-Li coefficients lead to certain zerofree regions. Moreover, we also show that negativity of certain t-Li coefficients leads to existence of certain zeros. This is a continuation of F. C. Brown’s and A. D. Droll’s work with similar type of problems.
Lastly, in the third article, we prove an explicit estimate for the number of primes in arithmetic progressions assuming the generalized Riemann hypothesis. This sharpens and generalizes earlier results proved without assuming the generalized Riemann hypothesis or which apply only to some arithmetic progressions.