International child abduction – balancing on a tightrope between procedural effectiveness and the protection of human rights : The Hague Child Abduction Convention and the European Court of Human Rights 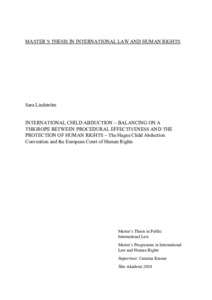 International child abduction cases consist of complex and sensitive issues that have become more common alongside globalisation and increased international interaction between people. Cases can be considered difficult to unravel as they implicate various actors and legal instruments with differing interpretations of the Hague Convention objectives, regulating international child abduction. These regional legal instruments in Europe (the region this thesis will limit itself to) have other requirements of their own that States are expected to adhere to.

The purpose of the Hague Convention is to mandate Contracting States to promptly return wrongfully removed or retained children back to their State of habitual residence unless an exception to this return obligation is established. There is no obligation to return an abducted child if it can be demonstrated that return will expose the child to physical or psychological harm once returned. Other exceptions to return might be mature children that oppose return or if it is demonstrated that the child has settled in the State of abduction. For the objectives of the Hague Convention to work extensive and demanding requirements must be met by the Contracting States and the exceptions are to be interpreted strictly. The European Court of Human Rights (ECtHR) operates under the European Convention of Human Rights (ECHR) and its case-law is binding for States that have acceded to the institution. ECtHR has mostly supported the objectives of the Hague Convention, foremostly the prompt return and State of abduction to refrain from examining any custody related issues as the State of habitual residence is seen as the most suitable for this. However, recently the ECtHR has changed is perception on how States of abduction are to proceed in proceedings, calling for States to examine the circumstances and giving exceptions to return greater regard as a way to protect the human rights and interests under ECHR.
Overall, the ECtHR has been inconsistent in interpreting the Hague Convention, making it difficult for States as are placed on a tightrope between the procedural requirements of the Hague Convention and more subjective requirements of ECHR, foremostly under Article 8. States have to be efficient and correct when performing an assessment of the entire situation, while ensuring that there is no violation of the rights of the child, the abducting parent or the left behind parent – and the preference is to perform this assessment promptly within six weeks’ time. Some have argued for adoption of an additional protocol to the Hague Convention, which could complement the existing framework that would improve enforcement of return orders, the protection of human rights as well as the overall function of the Hague Convention. However, this is partly opposed, and adoption of new framework will take time. Therefore, a protocol is no solution for the near future.
The current interpretation of the existing legal framework is therefore the most reasonable solution. If correctly applied, an effective examination of defences to return could strike a suitable balance between the prompt return mechanism and the best interests of the child.