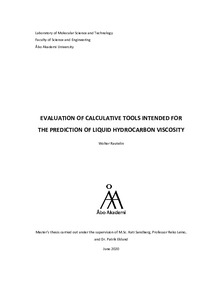 The main purpose of this work was to comprehend and promulgate the process of predicting the kinematic viscosity of liquid hydrocarbon mixtures using empirical correlations and mixing rules. The performance of the most promising empirical correlations, describing the temperature dependence of the kinematic viscosity of liquid hydrocarbon mixtures, as well as mixing rules, describing the outcome of combining two fluids differing in kinematic viscosity, are evaluated by comparative means against a diverse experimental dataset attained exclusively for this work. The evaluated methods were chosen based on recognition and potentiality expressed in previous publications. A total of five empirical correlations, six mixing rules, and recent amended versions (where applicable) were investigated. The general results indicate that the most accurate and universal method of both types were found.