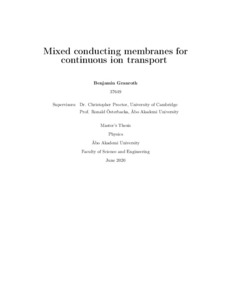 Brain cancer is difficult to treat due to the blood brain barrier, which blocks most drug molecules from passing from the blood into the brain. A common way of circumventing this barrier is using convection enhanced delivery, where a catheter is inserted through a hole in the skull and drug solution is administered into the tumour by applying a low pressure. This method suffers from reflux and the local pressure increase inside the brain may cause severe side effects for the patient. The organic electronic-ionic ion pump is an attractive alternative to this method due to its dry delivery, which means that no solvent is transported along with the drug.


A problem with the ion pump in drug delivery applications is that the amount of ions delivered due to an applied potential is severely hampered by the formation of the electrical double layer, which terminates any ionic drift current within seconds. The aim of this thesis was to investigate a novel membrane type and whether electromigration of ions, due to an applied potential, is significantly larger than diffusion.

Multistep amperometry was used to compare the steady state current of the membranes, which was assumed to be a mix of electronic and ionic current. Ion transport experiments was conducted to compare diffusion and electromigration of two different ions: methylene blue and \ce{Na+}. Electromigration was found not to be significantly larger than diffusion with this experimental setup.