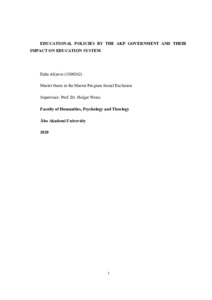 This study examines the historical background of manipulated education in Turkey, further analyzing the latest educational reforms by the AKP government (Justice and Development Party-Adalet ve Kalkınma Partisi), and understanding how these reforms lead to polarization.

Turkey is an ethnically mixed and diverse country related to its geographical location in the Middle East, Europe, and Central Asia, as well as being the heritage of the multinational Ottoman Empire. Most Turkish governments have preferred to use the "nation-building" strategy according to their preference and educational policies making it an essential part of nation-building. While Ataturk's educational policies included the aims of Westernization and secularization, Erdogan's educational policies aim for an Islamization of Turkey. In this way, Erdogan's political ideas and political Islam contradict the ideas of Ataturk's secularism, which creates disputes and misconceptions between Kemalists (Ataturk's supporters) and conservative nationalists (Erdogan's supporters).