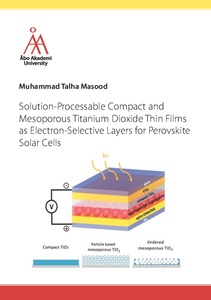 Perovskite solar cells (PSCs) is a promising photovoltaic technology for low-cost electricity generation to fulfill future demands. However, the success of any photovoltaic device is highly dependent on the quality of its selective contacts. Having poor selective contacts in a solar cell implies inappropriate extraction of photo-generated charge carriers in the absorbing material upon illumination. The overall aim of this research thesis was to systematically study three different aspects of the TiO2 electronselective layer (ESL) used in PSCs: First, to optimize the thickness of the compact TiO2 layer in order to rule out the possibility of any morphological defects such as pinholes. Second, to activate the surface of the subsequent mesoscopic TiO2 layer using oxygen plasma and UV light, and to investigate its influence on the performance of mesoscopic PSCs. Third, to use block co-polymer-templated ordered mesoporous TiO2 films to model compact TiO2 ESLs containing well-defined pinholes and to study the influence of these “induced” pinholes on the performance of planar heterojunction PSCs.
In the first study of this thesis, the thickness of dip-coated compact TiO2 electron-selective layers (ESLs) was optimized to minimize possible exposure of conductive FTO (fluorine-doped tin oxide) crystals through the ESL (also termed pinholes). The dip coating method was employed as a step towards calable and uniform thin films for PSCs. When the ESL is not thick enough due to insufficient amount of precursor available to cover the entire rough FTO surface, parallel shunt pathways are likely to form between the perovskite and the underlying FTO. This problem was solved by optimizing the TiCl4 precursor concentration in the sol. A 30 nm thick compact TiO2 layer was found to perform optimally in PSCs. With further increase in thickness of the compact TiO2 layer, the device performance remains nearly the same. However, if the layer is too thick, it can potentially reduce the device performance due to increased resistance or increased light absorption by the compact TiO2 layer.
A mesoscopic nanoparticle-based TiO2 scaffold layer is generally coated on the top of the compact TiO2 layer in conventionally structured PSCs. In the second study of this thesis, the surface of such mesoscopic TiO2 layers was activated by oxygen plasma or UV light to enhance the wettability of the nanostructured layer. The different surface activation methods were found to significantly influence the composition of perovskite light absorber and the morphology of its capping layer, which subsequently manifested in changes in the device performance. Oxygen plasma treatment of the nanostructured layer resulted in the activation of both the exterior and interior surfaces of the scaffold, which subsequently resulted in a dense crystallization of the lead iodide (PbI2) precursor within the nanostructure. This significantly reduced its conversion to perovskite upon its reaction with methylammonium iodide. On the other hand, exposure to UV light only activates the top-most surface of the scaffold. Thus, in this case the PbI2 crystallized sparsely within the nanostructure similarly as when no surface activation is performed. Therefore, its conversion to perovskite was still quite efficient. The poor conversion of the plasma-treated sample resulted in a 25% reduction in the device performance in comparison to devices prepared without any surface activation. On the other hand, the performance of devices prepared on top of UV-treated mesostructured TiO2 was found to be improved by 20% in comparison to non-treated samples.
Furthermore, ordered mesoporous TiO2 thin films were prepared by di-block copolymer templating in combination with dip coating. These films turned out to be useful for modelling pinholes in compact TiO2 ESLs. Therefore, in the third study, planar heterojunction PSCs were prepared to investigate if these “intentionally-induced” pinholes in the compact TiO2 layers pose any threat to the device performance. The porosity of the TiO2 films was increased to simulate the increase in density of so-called “induced” pinholes. Surprisingly, the increase in porosity had a very small influence on the device performance. The short-circuit currents were found to slightly increase with a decrease in the opencircuit voltage; thus, the overall power conversion efficiencies remained nearly the same. However, the reproducibility of the device performance was found to be strongly reduced when the thickness of TiO2 films (with highest porosity) was lowered down to 20 nm. This study suggests that the presence of narrow pinholes do not adversely affect the device performance provided that the thickness of the TiO2 layer exceeds a certain critical limit.
An important finding from this work was that ultrathin compact TiO2 films possess pinholes, which can be detected by X-ray photoelectron spectroscopy. The pinholes in the compact TiO2 layer not only reduce the device performance but also cause the formation of s-shaped kinks in the negative voltage regime of the current-voltage curves. Another conclusion was that the roughness of the underlying conductive substrate influences the quality of the compact TiO2 layer. Smoother substrates are expected to be completely covered by thin compact TiO2 layers without the formation of pinholes. There is still a possibility of pinholes in thicker compact TiO2 films (due to microbubble formation or improper wettability of the underlying conductive substrate), but they do not significantly reduce the device performance since the perovskite is not able to form interconnected networks throughout the narrow defects down to the underlying conductive substrate. Another important learning outcome was the knowledge that the processing parameters for device fabrication must be carefully controlled to avoid potential reproducibility issues. Such processing parameters include surface activation protocols, treatment times, and storage and handling conditions.