Staging the Jewish Bourgeois Home: Women as consumers and producers of diverse public spaces in Stockholm at the beginning of the twentieth century 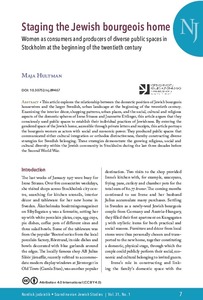 This article explores the relationship between the domestic position of Jewish bourgeois housewives and the larger Swedish, urban landscape at the beginning of the twentieth century. Examining the interior décor, shopping patterns, urban places, and the social, cultural and religious aspects of the domestic spheres of Irene Strauss and Jeannette Ettlinger, this article argues that they consciously used public spaces to establish their individual practices of Jewishness. By entering the gendered space of the Jewish home, accessible through private letters and receipts, this article portrays the bourgeois women as actors with social and economic power. They produced public spaces that communicated either cultural integration or orthodox distinctiveness, thereby constructing diverse strategies for Swedish belonging. These strategies demonstrate the growing religious, social and cultural diversity within the Jewish community in Stockholm during the three last decades before the Second World War.