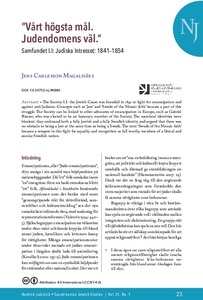 The Society I.I: the Jewish Cause was founded in 1841 to fight for emancipation and against anti-Judaism. Concepts such as ‘Jew’ and ‘Swede of the Mosaic faith’ became a part of this struggle. The Society can be linked to other advocates of emancipation in Europe, such as Gabriel Riesser, who was elected to be an honorary member of the Society. The members’ identities were bivalent: they embraced both a fully Jewish and a fully Swedish identity and argued that there was no obstacle to being a Jew at the same time as being a Swede. The term ‘Swede of the Mosaic faith’ became a weapon in this fight for equality and recognition as full worthy members of a liberal and secular Swedish nation.