A Renaissance of Jewish Studies in Contemporary Germany 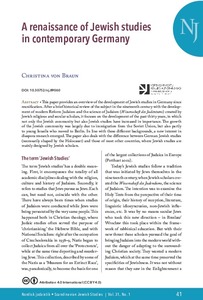 This paper provides an overview of the development of Jewish studies in Germany since reunification. After a brief historical review of the subject in the nineteenth century with the development of modern Reform Judaism and the science of Judaism (Wissenschaft des Judentums) created by Jewish religious and secular scholars, it focuses on the development of the past thirty years, in which not only the Jewish community but also Jewish studies have increased in importance. The growth of the Jewish community was largely due to immigration from the Soviet Union, but also partly to young Israelis who moved to Berlin. In line with these different backgrounds, a new interest in diaspora research emerged. The paper also deals with the difference between German Jewish studies (necessarily shaped by the Holocaust) and those of most other countries, where Jewish studies are mainly designed by Jewish scholars.