Back to the Post-Communist Motherlands: Reflections of a Jerusalemite Historian 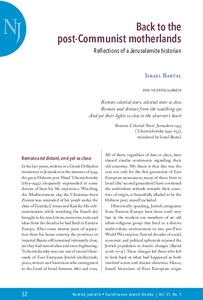 This article presents some of the personal observations of a veteran Israeli scholar whose long-years' encounters with the 'real' as well as the 'imagined' eastern Europe have shaped his historical research. As an Israeli-born historian of Polish-Ukrainian origin, (the so-called 'second generation') he claims to share an ambivalent attitude towards his countries of origin with other fellow- historians. Jewish emigrants from eastern Europe have been until very late in the modern era members of an old ethno-religious group. One ethnos out of many in a diverse multi-ethnic environment, whose demographic core survived and flourished for centuries in the old places. Several decades of social, economic, and political upheavals exposed the Jewish population to drastic changes. These changes lead several intellectuals who left their home countries to look back at what have happened as both involved actors, and distant observers. Israeli historians of east European origin found themselves confronted with a crucial question: in what way the past in the Old Country connected (if at all) to the history of Israel. Following some 40 years of academic career in the field of eastern European Jewish history, it is claimed that until the collapse of the Soviet Union, the image of eastern Europe that runs through the Israeli historical research has been shaped in large part by members of the different generations of emigrants, outside of eastern Europe. The renewed direct contact after 1989 caused a dramatic change: within a few years, Israeli historians were examining archives and libraries throughout eastern Europe. After seven decades of isolation between the Israeli historian and the primary sources necessary to his/her research in the archives, the new wave of documents was celebrated in Israeli Universities. Yet far more influential was the revolution prompted in 1989 on the historical perspective from which Israeli historians could now examine the Jewish past. What happened in 1989 has seemed, to some Israeli historians, a breaking point marking the end of the eastern European period in the course of Jewish history. The article concludes with some thoughts on a new historical (Israeli) perspective. A one that fits a time when hundreds of thousands of immigrants from what was the largest eastern-European Jewish collective in the world inhabit a remote Middle Eastern nation-state.